Located in the furthest end of the Gulf of Saint-Tropez, Port Grimaud is lacustrian private town. Cretaor of this unique achievement  is the French architect François Spoerry who bought in Grimaud a marshy piece of land in 1962. Construction began in 1967 and ended in 2000.
Port Grimaud is divided into three "districts" administered by three different entities: Port Grimaud I (the largest), Port Grimaud II (South) and Port Grimaud III (also known as “Marina de Port-Grimaud”).
Port Grimaud South  is the more residential and private of the three marinas.  “Marina de Port Grimaud” which can harbour up to 500 boats with only 60 berths available for short term stays.
Port Grimaud offers a large variety of shops and services based in the marina complex, mainly on the three main squares of the village: the “Place des Artisans”, the “Place du Marché” and the “Place des Six Canons".
Navigating or walking around the marina or the streets,  you will note an  enchanting environment : houses with colorful exteriors and roman tiled roofs. Many quays and private piers where residents berth their boat. The building complex  (2,400 houses) has been registered in 2001 as part of the 20th Century Architectural Heritage. 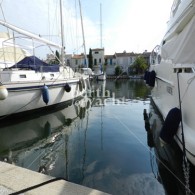 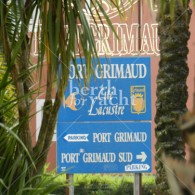 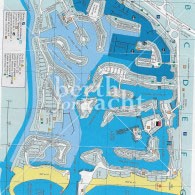